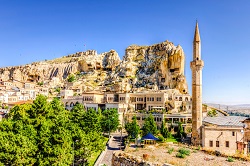 Ürgüp Temenni Hill is one of the must-visit locations in Cappadocia, with its unique ruins and its ability to possess the Cappadocia landscape.

The hill, which is located in the center of Ürgüp and is one of the first destinations that comes to mind when it comes to panoramic viewing of Cappadocia, is located at an altitude of 80 meters. Attracting the attention of local and foreign tourists, Temenni Hill is a popular destination for those who want to wish and photograph the beauty of Cappadocia.

There is no vehicle to go to the hill, vehicles must be parked near Cami Kebir. The scenery witnessed even while climbing up Temenni Hill is simply fascinating.

There is also a very important feature that makes Ürgüp Temenni Hill special. Kılıçarslan Tomb is located on this hill. There are also mausoleums in the tomb, which was opened to visitors in 2013 after necessary arrangements were made. Seljuk sultans who escaped from throne fights and Mongol raids and took refuge in Ürgüp are thought to have been captured and killed in the area.. On the western slope of the hill is the St. Georgios Church. Although all the walls of this ruin have been demolished and only the carving hall remains, this work is still worth seeing.

Both natural beauties and historical ruins fascinate those who come to Cappadocia. While the historical artifacts built in different periods complement the texture of the region, it continues to be the center of attention of local and foreign tourists.

Ürgüp Grand Mosque is also among the must-visit destinations in Cappadocia. Ulu Mosque and Madrasa, built by Karamanlı Taşkın Pasha as a reflection of the tradition of the Ulu Mosque from the Seljuks, has survived to this day.

There is no exact information about the architect of the building built on a square-like plan. There are two tombs in the courtyard of the mosque and one of the tombs is known to belong to Karamanlı Taşkın Pasha.

There are many locations in Cappadocia that those who are excited about culture and faith tourism can visit except the Ürgüp Grand Mosque. Cappadocia, which has hosted many different civilizations since ancient times and has important destinations for Muslims as well as Christians, makes every step a new discovery. If you turn your route to Cappadocia, you can see the unique Cappadocia artifacts closely and experience a holiday experience that is impossible to forget in a lifetime. 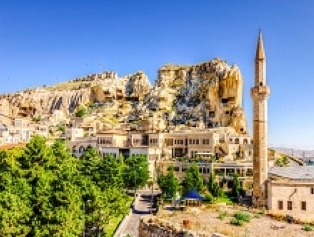 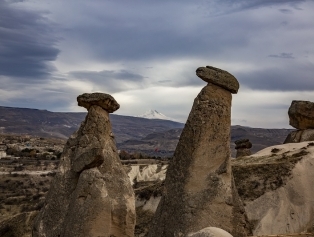