In the Zelve Valley, which houses large and pointed fairy chimneys, you can see many ancient structures. You can come across monasteries, cave houses, and churches made by human carving. While touring the Zelve Open Air Museum, you can also consider trekking through the rugged areas of the valley.

After all this, the last thing you need to do in the valley is to attend the fascinating Zelve Mapping Show. 3D Mapping Show; is the reflection of the special animation contents prepared in accordance with natural texture through projection devices on the fairy chimneys. In the show, you can watch the centuries-old history of the region and the development of civilizations chronologically. In addition to that, you can find Ottoman History, modern Turkey and the development of Cappadocia.

Paşabağ Valley, also known as the Valley of the Priests, covers a very large area surrounded by mushroom-shaped fairy chimneys. The valley, which is frequented by many tourists, is one of the regions where the world famous fairy chimneys are the most intense and prominent. Its unique scenery and mystical atmosphere make every person who steps into the fairy-tale land deep in thought.

As can be understood from its other name, in ancient times, Christian clergymen lived and served as missionaries in Paşabağları. The priests, who retreated here, have created living spaces and religious shrines in the valley throughout their lives. There is also a historical carved church estimated to have been built 1000 years ago. The church among the mushroom-headed fairy chimneys will make its visitors feel its mystical feelings.

After entering the valley, you can see many retreats. When you go a little further, you will come across different fairy tale ways. You have to be sure that each road leads to a different story. You can collect and eat fruits from mulberry trees in Paşabağ Valley and witness the millions of years of nature's work.

Paşabağ Valley is located in Zelve Ruins, which is very easily accessible. The area known as the old religious center is 5 kms from Avanos and 1 kms from Paşabağ. 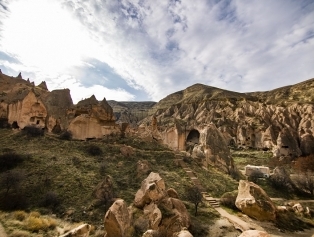