Hacıbektaş, one of the most visited areas of Nevşehir, deserves to be a favorite of tourists with its sculptures as well as its spiritual atmosphere.

Unlike an ordinary historical building, Hacı Bektaş-i Veli Mausoleum is very important, as it is the center where Bektashism emerged. It has been nominated for the UNESCO World Heritage List. You can see the manuscripts, calligraphy samples and items belonging to the Bektashi order in the Hacı Bektaş-i Veli Museum. The mausoleum is architecturally divided into 3 separate courtyards. Nadar Courtyard, stands out as a very large garden. In Dergah Avli, you can see the Mosque, Fountain, House and Mansions, Square Pool and Historical Arches. When you step into the Hazrat Courtyard, you will see the tomb of Hacı Bektaş-i Veli. While visiting the museum, you can visit many areas, from the rooms where dhikr is made to the halls where science is produced.

During the trip, you will be visiting an important center of Islamic history, feeling the mystical atmosphere of the building. In order to pass through the doors in the complex, it is often necessary to bend down. The reason why the doors were made so low was that the head was bowed and it meant respect. The tomb is located 60 kms from Nevşehir.

It is said that Hacı Bektaş Veli occasionally stayed in a small cave with an entrance and exit, located high above.

The cave entrance, which is located on a sloping hill about 3 kilometers east of the district center, is wide enough to walk easily. Inside the cave, there is a hole that opens out and is of a size that can hardly be passed through. There are also widely known beliefs about Hacıbektaş Çilehanesi. It is narrated that people with sins cannot pass through this hole and that impeccable ones can pass easily.

The district is also famous for the works around it. There is an arched fountain in the western part of the hill where Çilehane is located, there are Kulunç Kaya and Minder Kaya, which are thought to be connected with Hacı Bektaş Veli in a mythological sense. Minder Kaya took this name because of its shape and it is believed that Hacı Bektaş Veli was sitting on this rock. 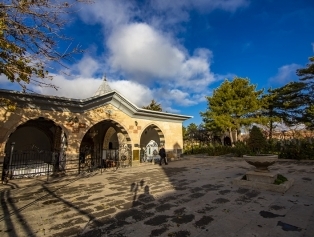