Kayaşehir came about by chance when the urban transformation project was being carried out in 2014. The region, which has been declared an archaeological site, is a huge living space with a rock-carved church decorated with frescoes, passage tunnels and nearly a thousand rooms. It is also the world's largest slope/hillside habitat. As a result of archaeological excavations; military, religious and social habitats such as waterways, rock-cut tombs, tunnels, and shelter areas have been unearthed.

Under the magnificent view of Kayaşehir Castle, which houses one of the world's largest underground cities, perhaps the largest, where thousands of people can live. With the work done, 1271 historical artifacts were unearthed. The castle, which was built on one of the highest points of the city, used materials made of volcanic rocks and tuffs. The building, which is one of the symbols of the region, has a magnificent city view.

Kayaşehir is located at the center of Nevşehir, in an area that is very easily accessible. You can step into the impressive living space from the city center by car or on foot. 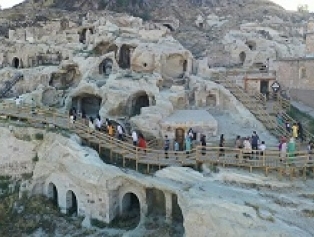