Ortahisar Castle, also known as the most spectacular fairy chimney of Cappadocia, is located in Ortahisar town of Nevşehir. Said to be one of the first multi-storey settlements in the world, this castle is surrounded by steep valleys on three sides. Its geography enabled the castle to be used for protection and shelter in ancient times. The castle, where the first settlement of the town started, became the center of Ortahisar in time with the settlements built around it.

The history of the castle is very old. After the Hittite, Phrygian, Lycian, Persian, Roman and Byzantine domination, the region came under the rule of the Turks. The castle, which has witnessed many victories and defeats throughout history, consists of chambers and tunnels built by carving rocks. It has a very rich cultural heritage and with this feature, it was the first region in Cappadocia to be opened to tourism.

Ortahisar Castle, which welcomes visitors with all its glory from the moment you step into the town of Ortahisar, provides a full adrenaline experience for those who fear heights. In the open air, all the beauty of Erciyes Mountain awaits you at Uçhisar Castle, İshak Pasha Castle greets those who turn their gaze to the east. Although the process is a bit painful while climbing to one of the highest points of Cappadocia, the beauty encountered at the summit is worth everything. 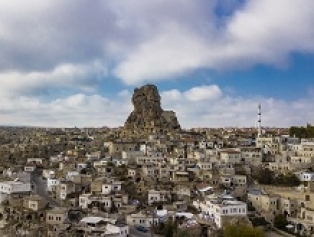