It is the museum of Cappadocia that attracts much attention. In Göreme, which has many places of worship, the texture of each church and monastery differs according to their periods. Göreme region, which is the retreat of past thinkers and monks, has also become the land that inspired Saint Basil the Great.

Göreme Open Air Museum was included in the World Heritage List by UNESCO in 1985. Its historical and natural texture is meticulously preserved and maintenance is ongoing. The museum, which stands out in relief with the increasing number of tourists every year, is visited by more than 1 million people every year and this number is constantly increasing.

Monastic life has been lived for centuries. The frequency of the dining halls and places of worship in the region, which hosts intense monk life between the 4th and 13th centuries AD, is remarkable. With this form of life, the region became the first point of monastery education system.

1000-year old Tokali Church, which is the largest rock church in Cappadocia, is located here. The structure is quite interesting and consists of 4 separate sections. It amazes people with its frescoes and architectural features that are still alive. Many scenes such as the Ascension of the Prophet Jesus and the Descent into Hell decorate the church walls.

One of the most remarkable buildings of Göreme Open Air Museum is the Dark Church dating back to the 12th century. The frescoes are quite evident since the structure does not receive too much light. The church consists of columns inside, also has a dome. Many scenes staged on the walls are from the history of Christianity and the Torah. It is forbidden to take photos in order to protect the building.

You should definitely see the churches and monasteries which have unique stories and architectural features; Priests and Sisters Monasteries, Elmalı “the Apple Church”, Saint Barbara Chapel, St. Basil's Church, Snake Church and Çarıklı “the Church with Sandals” are also located in this region. 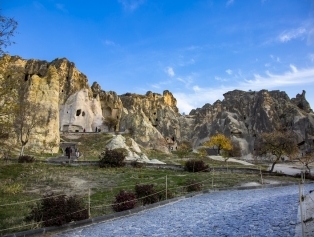